“If you can breathe, you can meditate,” Forest resident Larry Inderbitzin says. He shares this piece of wisdom with attendees at the meditation orientation class he leads on campus.

There are hundreds of ways meditation is practiced around the world. Larry has spent much of his life practicing and leading others in a form based on a Western, nonsectarian version. This grew from a practice that goes back to about 1500 BC.

Larry is professor emeritus at the Emory University School of Medicine, where he served as both an academic psychiatrist and a training and supervising psychoanalyst. However, his vocation and interest in meditation were quite separate from one another. During his career, he wasn’t comfortable talking about his meditation practice. He describes himself during that time as a “closet meditator.”

Larry was first inspired to pursue a meditation practice in 1971 by Herbert Benson, a cardiologist at Harvard Medical School. In his research, Dr. Benson found that meditation has profound effects on the body. His book, The Relaxation Response, describes these benefits.

After much exploration on his own part, Larry learned that meditation takes practice. Likewise, it requires determination and two other essential elements: relaxation and alertness. With these in mind, he settled on a Soto Zen practice for himself.

The benefits of consistent meditation practice

Over the years since then, the benefits of meditation have been widely studied, and the practice is now taught in at least 800 leading medical centers around the world, including Duke University Medical Center’s Integrative Medicine program. Regular meditation has been reported to promote mental and emotional wellness, including improved memory, learning, self-awareness, goal setting, immune function, empathy, kindness, and resistance to illness. It can also decrease heart rate, anxiety, stress, blood pressure, and depression. 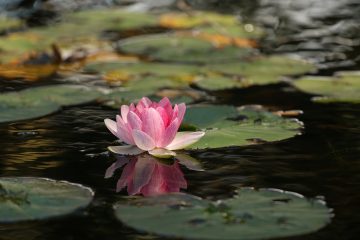 Research shows that after just eight weeks of consistent, daily meditation, alpha waves in the brain become more active, spreading feelings of positivity, love, and happiness. At the cellular level, the practice can encourage the growth of telomeres. These can help ward off cardiovascular disease, diabetes, cancer, and Alzheimer’s. Although all of these findings have not been equally and/or sufficiently validated, the overall benefits are widely accepted.

What meditation is and is not

Larry’s own practice has centered on Soto Zen for decades. The actual method is very similar to Vipassana, from which “mindfulness” practice derives. Larry avoids the popular mindfulness label, however, believing it is a misleading, misused term. He says that a very misunderstood part of meditation is that people often assume the goal is to not think. As such, they struggle fruitlessly against thinking. The brain produces thoughts like the stomach secretes acid, however, and this is normal.

Meditation is not about not thinking. Instead, it is about being aware of thoughts that enter one’s awareness. When lost in thought, we tend to reflect on the past or think about the future. In such cases, we are not even aware that we’re thinking; Zen practitioners call this the monkey mind. Current researchers call it the blah blah, or the default mode network.

There are still those who say they can’t meditate. To them, Larry reassures, “Even if your mind is racing, if you notice it, you’re meditating.”

Both Zen and Vipassana hold that mindfulness of the breath in one’s belly is the anchor of meditation. This helps us return to awareness when we recognize that we have been lost in thought. Humans are naturally, effortlessly aware; however, many are unaware that this can be cultivated.

Entering awareness at The Forest

Larry has led Meditation Circle gatherings on campus for the past four years. The circle meets every Monday and Friday from 11:30 a.m. until noon. The group hopes to inspire interested parties to establish a consistent meditation practice.

Larry recommends a daily practice of meditation, even if only for five minutes a day initially. Such a habit develops the consistency necessary for the meditator to reap the practice’s many benefits.