“There’s an old saying that my grandfather and father both raised me with,” says Emily Steiskal, General Services Administrative Assistant. “’Fool me once, shame on you; fool me twice, shame on me.’ They both told me there isn’t a third time because they weren’t raising a fool!”

Most certainly, a fool Emily is not. This hardworking Forest team member has worn many hats in her professional life, but nothing has brought her the level of satisfaction and fulfillment as her role on the General Services team. A self-proclaimed “big nerd” who enjoys reading and watching movies off the clock, Emily’s on-the-clock persona is a fierce multitasker and customer service guru – something she credits to time and experience.

Originally from Chicago, Illinois, Emily moved a lot growing up. Her mother worked for the Federal Bureau of Prisons, so the family moved with each new job opportunity that came her mom’s way. After her parents divorced, Emily and her mom made their way to North Carolina, but not before the family spent time living in Illinois and Kentucky. 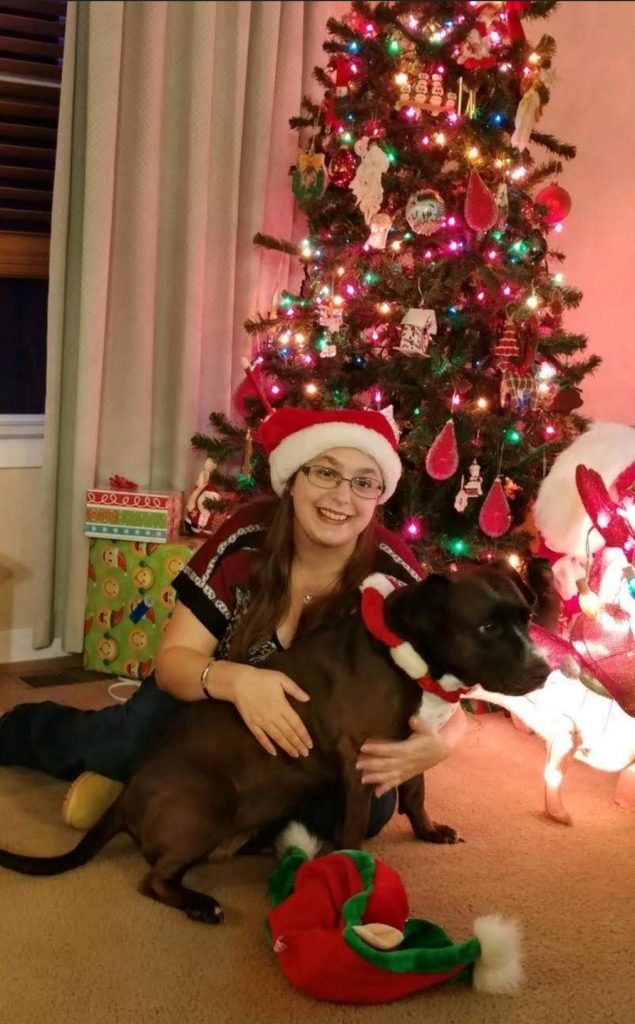 Emily attended high school at Eastern Alamance High School in Mebane, working part-time as a cashier and bagger for Food Lion. She also helped her mom stock shelves at a gas station. After graduating early from Eastern Alamance, Emily left North Carolina again, this time to attend Carroll University in Waukesha, Wisconsin. There she earned a bachelor’s degree in Business Administration with an emphasis in Human Resources, simultaneously laboring through four jobs to make ends meet. She worked the desk in the business office on campus, served nights at an after school program and daycare facility, cleaned after fellow students as a Resident Building Assistant, and served as a Resident Assistant during her senior year.

Once her postsecondary education was complete, she didn’t stick around the Midwest. “After four years in Wisconsin, I decided that the cold winters were no longer for me,” Emily confesses. With that, she moved back to the Old North State.

Back in North Carolina, in the two years prior to joining The Forest, Emily worked for Alamance County. First she served as a shelver and circulation clerk for May Memorial Library in Burlington, then as a 911 dispatcher for Alamance County Communications, where she worked closely with police, fire, and EMS.

“While I have always been a multitasker at heart, I have to give the majority of that credit to being a 911 dispatcher,” she shares. “Nothing in my experience has tested my multitasking abilities better than talking to a caller, communicating with a police officer and fellow dispatcher to get EMS rolling at once, keeping all of the lines straight, and doing my best to assure the caller that help is on the way.” 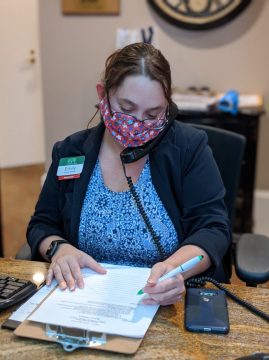 After leaving Alamance County Communications, Emily struggled to find a good job. She worked with several different staffing agencies and on her own to find work. In the almost year and a half between leaving 911 and finding The Forest, she cleaned houses and worked as a nanny. She also briefly served as a legal administrative assistant, which led her to becoming a Notary Public for the State of North Carolina. Further still, she managed the social media page and shop for a small local thrift store, and even helped her stepdad hang sheetrock (mudding, sanding, and cleaning scrap) when his work crew was short or strained for time.

With many jobs under her belt and lots of experience to boot, Emily’s strong work ethic – which she credits to a “very militaristic upbringing” by her grandparents, as well as her unwillingness to accept failure – never wavered.

In late October 2017, Emily found her way to The Forest at Duke by way of a staffing agency that sought to fill a temporary role on campus. She started as a short-time receptionist at the front desk of the Community Center while team leadership worked to permanently fill the position.

“Within my first week, I had decided that this was where I was going to stay,” Emily admits. Determined to make a professional home for herself on campus, she began applying to every position in which she was interested and for which she was eligible.”

One job she repeatedly heard about really struck her fancy. Nathan Summers, Director of General Services, was looking for someone to fill a new role he had created to support his very large team: an Administrative Assistant for General Services. Once the front desk Receptionist position found a permanent team member to fill it, Emily really set her sights on the vacancy in Nathan’s department.

“I had grown in my role as the Receptionist and was able to do more than was originally intended for the temporary role,” Emily explains. “Nathan saw that I was good with the residents and could multitask without appearing flustered. One day, he stopped by the front desk and asked if I really wanted to stay at The Forest and [wondered] if I thought I could handle the position he was trying to fill. My answer was an immediate and confident ‘absolutely.’ We scheduled my interview for the next week.”

A niche for diligence

By February 2018, Emily left her temporary Receptionist post, stepping into her new role as the Administrative Assistant to the General Services team. Her first few weeks involved familiarizing herself with what the maintenance techs handled, how residents requested work to be done, and learning her way around WorxHub – a software program that allows team members to input and address work orders for maintenance and housekeeping (and, more recently, security and transportation).

Within a few months, Emily felt more comfortable with WorxHub and taking work orders from residents on a daily basis. She acquainted herself with each of the maintenance techs’ different specialties, learned the many different departments under the umbrella of General Services, and “[got] lost, a LOT.” She also grew close with Natasha Howell, now Lead Security Officer, who always made a point to come find Emily whenever she got turned around at The Forest.

Emily feels very fortunate to have joined the General Services family when she did. It felt like just the right time, especially as she got to grow with the position that Nathan had created, in turn getting to watch the department grow, too.

“While I still put in work orders for Maintenance every day, I now work closely with Housekeeping, Security, Transportation, and even from time to time, Marketing!” Emily gushes. In the role that she so deeply loves, she hears from almost every Forest department on a weekly basis, giving her plenty of opportunity for learning and development. Most of all, she enjoys knowing that she’s made someone’s day a little bit easier.

Notably, Emily’s dream would be to grow with The Forest and eventually become a Department Director here. “I am working very hard to climb my way up the chain of command as I grow as a team member,” she beams.

After landing her Administrative Assistant role in General Services, Emily visited a local Kohl’s department store for her first big splurge buy. “I bought some new business casual attire that I could proudly wear in my new position,” she divulges. “After that, I got my hair cut and treated my mom and stepdad to a nice dinner.”

The first time she saw the house – a stick-built, one-story ranch style in Graham’s Greenway Park subdivision – she immediately fell in love with it. “It was just the right size for me and in a neighborhood [with which] I was comfortable and familiar,” she says.

Built in 1963, Emily’s home features three bedrooms, one and a half bathrooms (in a Jack and Jill style), and original hardwoods throughout.

“I actually was not the first buyer of my house,” Emily confesses. “Right after I saw the listing and called my realtor, the house was [already] under contract. The first buyer and the seller could not come to an agreement on the bathroom floor, and the house was put back on the market. I was actually hanging out with Natasha from Security in her apartment when I saw the listing, and I remember yelling at her that my house was available again! I texted my realtor and he set up a showing for the next day. I made an offer on the house standing in the driveway after the walk through and settled with the previous owner later that evening.” 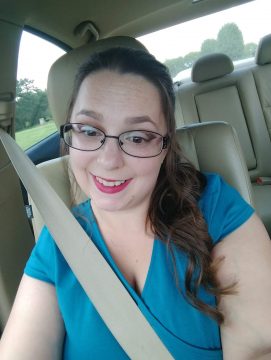 With her family’s gracious help, Emily has redone the sheetrock and the ceilings in her kitchen, dining room, living room, and hallway. All of those rooms have also been updated with a fresh coat of paint and small décor details.

Emily is currently renovating her bathrooms – installing a new tub and tiled shower, as well as two vanities. Her father replaced the commodes shortly after she moved in, and the previous owner had the floors redone as part of the purchase agreement. In the future, Emily plans to replace her roof, put a privacy fence around the backyard, and deck over the brick patio area behind her home.

At the end of the day 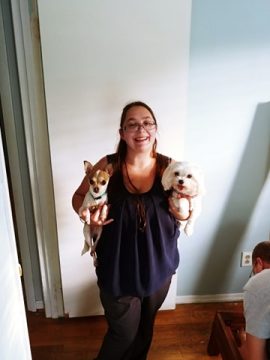 General Services, residents, and The Forest at Duke at large all benefit greatly from Emily’s presence on campus. Her dedication and follow through are key in much of the smooth operations across our community. Emily is instrumental in ensuring that residents’ concerns are heard, their maintenance requests are answered timely, and their satisfaction continues.

After working hard each day, Emily loves nothing more than to come home to her beloved Chihuahua, Ellie Mae, who is always excited to see her, and settling down for the evening. Her home, a gorgeous work in progress, is a reminder of her tireless efforts to find her way to personal freedom, fulfillment, and joy.

Emily’s role at The Forest, a hard earned position that continues to reward her tangibly and personally, is one that could have easily been tailor made for her. She has certainly found her place with us, and we hope she remains part of our family for a long, long time to come!