Sponsored by The Forest at Duke 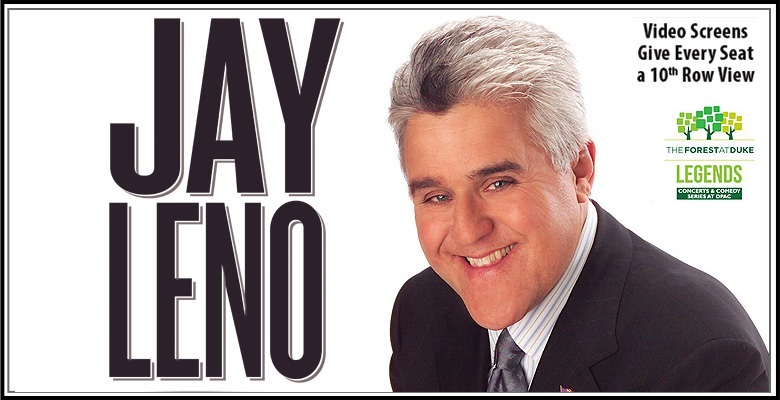 As if night-time ratings dominance were not enough with two decades of The Tonight Show with Jay Leno, Leno has also succeeded as producer and star of Jay Leno’s Garage The NBC creation, which is viewed on CNBC, gained an international following on the Web, and an Emmy Award.

An indefatigable performer, Leno loves to test his humor live on audiences across the nation, performing over 100 live appearances in nightclubs, theaters and stadiums each year, including during his long Tonight Show hosting.  He has been touted as one of the nicest people in show business and the hardest-working — a winning tandem for the man who says “Anyone can have a life – careers are hard to come by!”

When he is not performing, writing, doing charitable work, Leno keeps busy doing voice-over work in such movies as Cars and “Igor” and the hit-TV show The Fairly Oddparents (Nickelodeon), where the character “The Crimson Chin” – a superhero with a chin with superpowers – was inspired by Leno’s own noted jawline.

Sponsored by The Forest at Duke as a part of the Legends: Concert and Comedy Tour.

More information and tickets can be found here: https://www.dpacnc.com/events/detail/jay-leno-2